My younger sister ran in (and completed) the Marine Corps Marathon last Sunday! She also raised money for America Supports You and the Red Cross.
I could not help her run the 26.2 miles (which she managed very well on her own), but I did help her design an illustrated magnet she could send to her sponsors as a thank you. 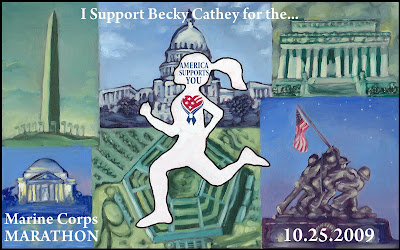 Oil on Bristol Paper (Image and type completed in Gimp)
The Marine Corps Marathon is called the Marathon of Monuments. It begins in Arlington, winds around the Mall and the Jefferson Memorial, back through Crystal City, and finally finishes at the Iwo Jima Memorial. This design followed that idea, and it was the one my sister ultimately chose for the magnet.
Another option. 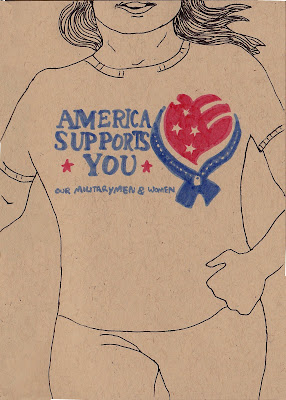 Ink on Recycled Paper (Edited in Gimp)
I wanted the logo for America Supports You to be somewhere in the illustration, and I like the simplicity of this idea. I also like the color and texture of the recycled paper as a background.
The final option was a collage. I had an older sketch of the DC skyline I had done for another project and I wanted to recycle it, adding the running figure made from painted sandpaper.

Ink, Oils, Sandpaper and Collage (Completed in Gimp)
Below is the original drawing that I took the skyline from. This was done some time ago for a web story project about a little girl named Gemma who lives in DC. We never ended up using the drawing for the project, but I'm not ready to let it be forgotten in my sketchbook just yet. 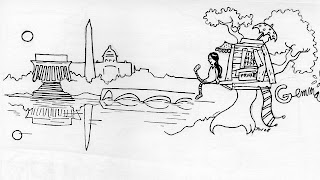 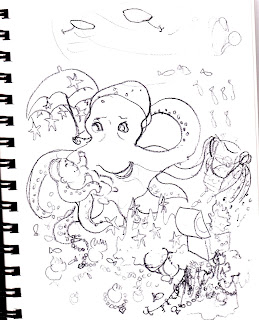 Pencil on Paper
This is the original sketch for a painting (below) I made for a friend's new baby boy. The theme of the nursery was "An Octopus Garden", based on the song by the Beatles. Octopuses collect shiny and interesting objects they find on the bottom of the sea and make themselves gardens, which is such a happy thought, thus a happy song about the idea. I was aiming to reflect that happy, safe feeling in the painting, where C is well-cared for by a friendly, albeit eccentric octopus in his undersea garden. I'm not sure what an octopus would collect for his garden, but I imagine buried treasure and old ship anchors would be a part of it! 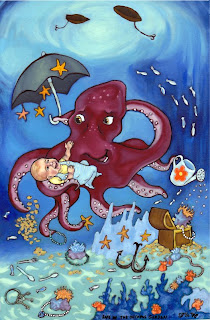 Oil on Painting Board
(I used a Colourfix[TM] Painting Board, the first time I have used one, and it was really nice, sturdy but flexible, with a nice texture. It came precoated with primer.)
Posted by Jennifer W at Saturday, October 31, 2009 No comments: