Women of Ghana and Long Bus Journeys - from Sketch to Painting 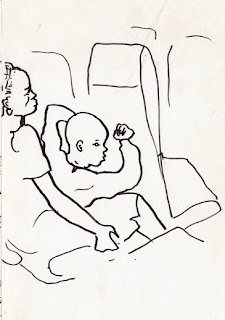 Marker on Paper
This sketch was quickly done in a crowded bus on the side of the road in Ghana. I believe the bus had broken down and we had been sitting crammed inside for hours, with more hours to go. I was wondering if we would ever get on the road again or if it would be better to get out and try to flag down another ride (and pay for another ride, losing the money I had already paid for my ticket).
The bus ride to the north was almost always miserable because the road was bad in places and the bus companies didn't want to waste good buses on a bad road. Children rode free, but not if they wanted their own seats, which meant that their parents rode the whole way with kids on their laps. Inside the bus, it was hot, especially after a breakdown when we weren't moving. This mother had been sitting with her toddler-sized child for hours and he was tired and cranky and struggling when I made this quick sketch of them, from my own seat a few rows back and across the aisle.
I liked the drawing because of the struggle between mother and son, as if he is fighting his way forth into the world. She tries to create a safe place for him, but is exhausted and frustrated herself. To me it was a metaphor for the whole process of birth and procreation in general, and especially motherhood. Love and pain. 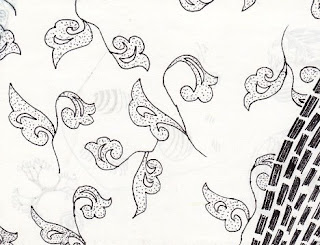 Ink on Paper
Later, as I spent more time with mothers in Ghana, I began to admire more than their strength in hardship. Their lives were full of celebration. I saw this in the multitude of designs of black on white that decorated the cloth they wore for celebratory events. Black and white cloth was worn for weddings, for funeral celebrations, and for baby naming ceremonies and outdoorings. And it was worn for women's ministry groups. On certain days, all the women in my church would dress in black and white designs and stand up and sing praise songs, clapping and dancing and waving white handkerchiefs. And when a new baby was born, they would all head off in the same black and white dresses to joyfully welcome him or her. 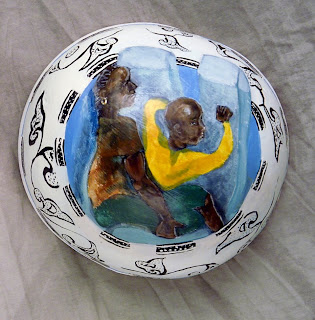 Oil paint on a halved Gourd
Eventually, I made a series of paintings attempting to express what I had learned from my Ghanaian women friends. I painted them on calabashes, which are halved gourds turned upside down. Calabashes were used in the kitchen as tools, for washing rice, drinking water, or serving local brews prepared by women. Artists also decorated calabashes in various ways, and the gourds were used in the construction of musical instruments.
The first painting I worked on was from the sketch of the woman and child on the bus. Later paintings were more successful, as I learned to adapt my style and technique to the materials, and for this one, I think I still prefer the original sketch. In terms of content, however, none of the later calabashes managed the level of emotion caught in this child's yellow arms, in his heedless struggle for independence against his formidable, albeit exhausted, mother.
Keeping a sketchbook on hand can salvage something worthwhile even from the pointlessness of a bus breakdown in the middle of a long journey.
For those in the area, the completed paintings will be on exhibit in the Arlington Central Library, Arlington, Virginia, during the month of August.
Posted by Jennifer W at Sunday, July 19, 2009 No comments:

Birds in a Basket 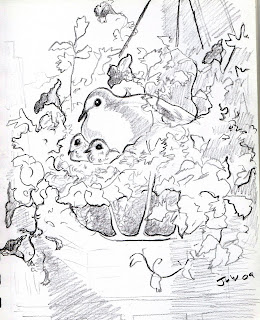 My sister decided to start a "kitchen garden" on the balcony. Now we have all kinds of things growing out there, including baby birds. This dove was so impressed with the comfortable atmosphere my sister had created, that she laid two eggs in her hanging plant.

It makes watering the plant a little challenging.
Posted by Jennifer W at Tuesday, July 07, 2009 No comments: