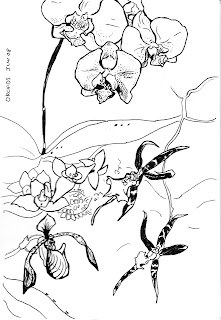 Orchids at the National Botanical Gardens in DC. I love wandering around the gardens on a hot day in the capitol. Trying to draw flowers without using color is also interesting.

I don't know if I was nearly as successful as ancient Chinese artists, who made peacocks iridescent and peaches pink without any colored pigments at all. This way they came closer to understanding an object's true nature, according to Victoria Finlay in her book, Color: A Natural History of the Palette (2002, Ballantine). I was looking for a book on color theory and found this one instead at the library. It isn't really about color theory, but more of a history of color, and I highly recommend it.

Colors were for professional painters--who were rather sneered upon by the elite, as creating something necessary but vulgar. Black, on the other hand, was for the gentleman artists, who combined the skills of poetry and painting, and who wanted to portray the landscape of the mind, not of the eye. (p. 91, on the history of the color black during the Tang dynasty)

She goes on to relate a story about Su Dongpo, a scholar-artist living in the eleventh century (p. 92).

Once...Su was criticized for painting a picture of a leafy bamboo using red ink. Not realistic, his critics said gleefully. "Then what color should I have used?" he asked. "Black, of course," came the answer.

One last interesting bit on the history of ink:

From early times both the Persians and the Chinese thought it was desirable to have ink that not only travelled seductively across the paper, but which also smelled wonderful. So they would add perfumes, to make writing the sensual experience that scholars deserved. Sometimes recipes for ink read like the random elements of a love poem: cloves, honey, locusts, the virgin pressing of olives, powdered pearl, scented musk, rhinoceros horn, jade, jasper, as well as, of course--most poignant and most common--that exquisite smoke of pine trees in autumn.
(p. 92)
Posted by Jennifer W at Tuesday, June 30, 2009 1 comment: 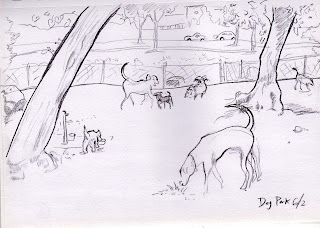 Pencil on Paper
June is a great time to be outside. This is a dog park near DC. I was with the Westie facing away from us, drinking water on the left.
Posted by Jennifer W at Tuesday, June 30, 2009 No comments: