(This is a repost from my blog on http://peacecorpsworldwide.org/art/)
How much water could I use in a day? One bucket for bathing, or maybe two. One for washing dishes. One for cooking. Three if I wanted to wash my clothes. And at least one for drinking. Seven trips, maybe eight. That was doable, I thought. I could carry that much water just from the borehole around the corner and down the path to my bungalow. 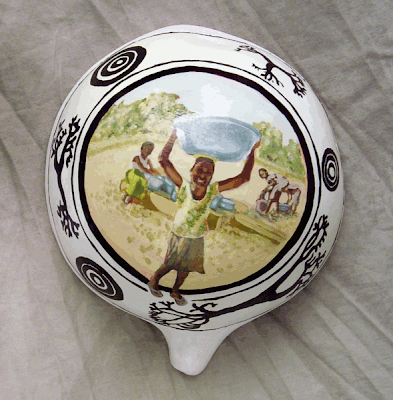 I arrived at the borehole still early in the day. The wives and small children of the other teachers at my school had already formed a line and they were terribly amused when I joined them. One of my neighbor’s daughters bounced up and down in her flip flops as she worked the pump handle, the rhythm sending a steady stream of clear water singing into a bucket.

They watched tactfully as I tried to imitate them, twisting a round piece of cloth into a donut shape and setting it on my head for a cushion. Then my neighbor helped lift my filled bucket over my head. I grabbed the bucket on both sides, wobbled for just a moment, and was on my way back to my bungalow.

I could do this. I could really do this, carry an entire bucket full of water on my head–oops–almost full anyway. A little water splashed over the side and dripped down my face and off my chin. I adjusted my posture, found my gait.

“Good morning!” It was my landlady. I had to stop and greet her. I stopped, but the water in the bucket kept moving. Another splash rolled down my shoulders. The landlady chatted for a few minutes, careful not to draw attention to the bucket of water, her face full of barely concealed amusement.

“See you later.” The obligatory greeting finished, I swayed, turned and started forward again, feeling several drops of water on the backs of my knees. An ache was spreading between my shoulder blades. All the way to my bungalow little bits of water splashed out every few seconds leaving dark spots in the sand.

Inside my front door I uncovered my water barrel and dumped in the fresh water. It went in with a whoosh and the water level in the barrel rose just an inch or two. I dipped a plastic cup in and drank it immediately, unfiltered. If I was going to carry water all morning, it was going to make me awfully thirsty.

In the end I could only manage four trips to and from the borehole. I listened to the steady deep-throated singing of the pump as water poured into the deep, metal basins, and felt the steam rising from the sandy path as a portion of my load splashed out on the way home. My clothes washing, I decided, could wait until another day. The sun rose quickly and it was too hot to continue.

The next time I filled a bucket for washing I thought for a minute and poured a little back into the barrel. I didn’t really need that last refreshing dipperful. I could never take water for granted again. 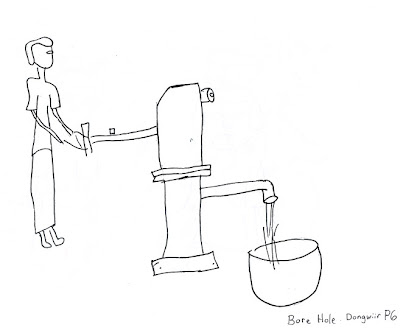 *Pictures: Top/A drawing by Dongwiir, a student in Ghana, of a woman pumping water from a bore hole. Below/Oil on calabash, a girl carrying water

Email ThisBlogThis!Share to TwitterShare to FacebookShare to Pinterest
Labels: Ghana

What's Wrong with this Picture? 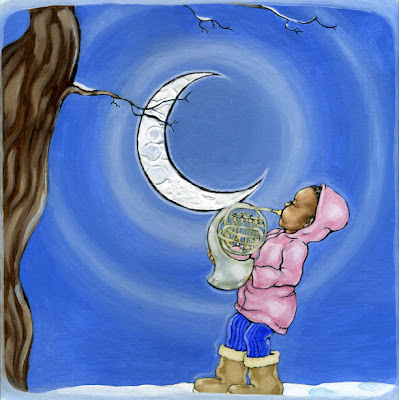 Okay, I painted all afternoon, then tossed the painting in the trash. It's been that kind of day. I have pretty good sketches (I think) for one of my current WIPs, but when I try to turn them into finished artwork, I'm having trouble.
This is the best attempt so far. Does anyone have any ideas what is wrong with this picture?
Posted by Jennifer W at Monday, August 23, 2010 2 comments:

(Artwork in video created in Inkscape)
Posted by Jennifer W at Monday, June 21, 2010 No comments:

How much do you know about Malaria?
For those of us living many miles from Malaria, we don’t have to spend a lot of time thinking about it.
This week I interviewed a random cross section of Columbus, Ohio, asking them to tell me what they knew about Malaria and to give me their best drawing of a mosquito. Just as everyone’s drawing is unique, so every person’s idea about Malaria is different. 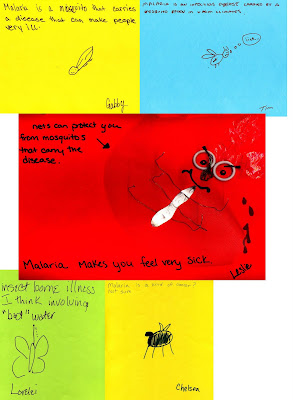 Mosquitoes, at least, are familiar. We look at Malaria, however, across a great deal of distance. Although 40% of the world’s population has to worry about Malaria every day, here in Ohio we haven’t had to think about that particular disease in a very long time.
Still, most of the people I interviewed knew at least a little about Malaria—that it is carried by mosquitoes, makes people very sick with a high fever, and is prevalent in tropical areas. One World War II veteran told me that he remembered many of his buddies becoming sick with the disease in Burma during the war. Someone else mentioned that, growing up in West Virginia, she remembered always being on the lookout for stagnant water because of a risk for Malaria in her area. 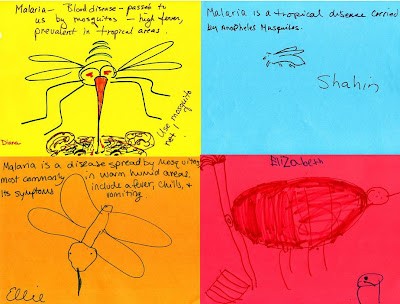 One of the most common answers was that Malaria is a tropical disease. Actually, Malaria once plagued much of the United States, Europe, and Russia. Efforts to eradicate it here were successful in the 1950s and 60s and the developed world moved on. Now Malaria is stronger than ever, with the greatest hold in Africa, Southeast Asia, and South America. It is the number one cause of child mortality in Africa, a major threat to women during pregnancy, and costs Africa an estimated 12 billion dollars in lost GDP annually, due to health care costs and lost productivity.
Whether we spend a lot of time thinking about Malaria, or hardly give it a thought, it does affect us, too, even here in Columbus. We live in a globalized society, and if you haven’t traveled yourself to a Malaria-endemic part of the world, you probably know someone who has. The United Nations has made it their goal to bring deaths from Malaria to near zero by 2015, and the United States is a part of that effort.
Malaria is preventable. It doesn’t have to play as large of a part as it does in the lives of so many people and in the economies of countries around the world. Any individual can make a difference, whether it’s by buying a ten dollar bed net for a child around the world or just by raising awareness and making sure the rest of the world still cares about Malaria.
And then, maybe soon, if a child in Africa is asked to draw a mosquito and answer the question “what is Malaria”, she too can tap her pen on the table and stare into space and answer, “I don’t know, is it a disease or a cancer or a bug, or what?” 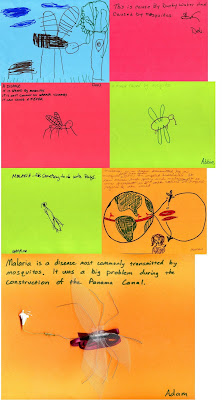 I want to say a really big Thank You to everyone who allowed me to survey them this past week! Everyone was extremely obliging and agreeable, taking time out of their workdays or lunch breaks or birthday parties to spend a few minutes talking about Malaria.
For more information or to donate a bed net, see: www.malarianomore.org
Survey Answers:
Malaria—Blood disease—passed to us by mosquitoes—high fever, prevalent in tropical areas. Use mosquito nets! -Diane, Social Worker
Malaria is a tropical disease carried by Anopheles Mosquitoes. -Shahin, Librarian
Malaria is a disease spread by Mosquitoes, most commonly in warm humid areas. Its symptoms include a fever, chills, and vomiting. -Ellie, Children’s Librarian
Malaria is a mosquito that carries a disease that can make people very ill. -Gabby, Student
Malaria is an infectious disease carried by a mosquito often in warm climates. -Tim
Nets can protect you from mosquitoes that carry the disease. -Leslie, Environmentalist
Insect borne illness I think involving “bad” water. -Lorelei, Library Patron
Malaria is a kind of cancer? Not sure. -Chelsea
This is caused by dirty water and caused by mosquitoes. -Deb, STNA
A disease. It is spread by mosquitos. It is most common in warmer climates. It can cause a fever. -Don, Police Officer
A disease caused by mosquitoes. -Abbie, Therapist
Malaria—has something to do with bugs. -Marylou
Malaria is a disease transmitted by a mosquito that has fed from an infected individual. It can cause high fever and malaise. It is more prevalent in 3rd world nations in tropical regions of the world. -Laura, Science Teacher
Malaria is a disease most commonly transmitted by mosquitoes. It was a big problem during the construction of the Panama Canal. Adam, Engineer
Posted by Jennifer W at Monday, March 15, 2010 No comments:

Two last cookbook images. There was a request for another Europe, because, as it turned out, there were no French recipes in the cookbook (a rather minor objection, I thought). The new illustration was designed to represent more of a central and eastern European feel. 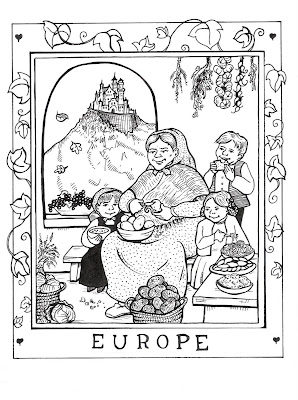 There was also a request to move North America out of the urban landscape and into the heartland. I kept basically the same people and their arrangement, but changed the background and the type of food on the table. Better or worse? 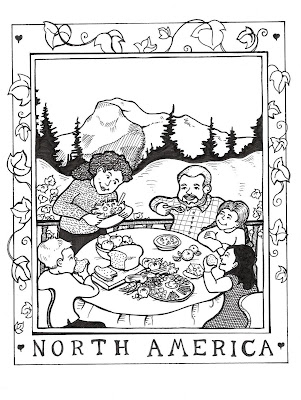 both Illustrations Faber-Castell Pens on Paper
Posted by Jennifer W at Monday, December 28, 2009 No comments: 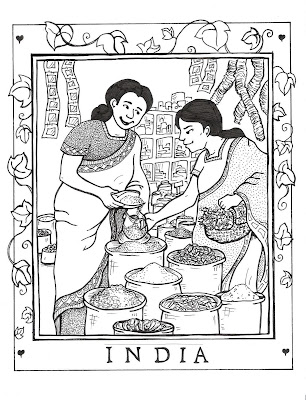 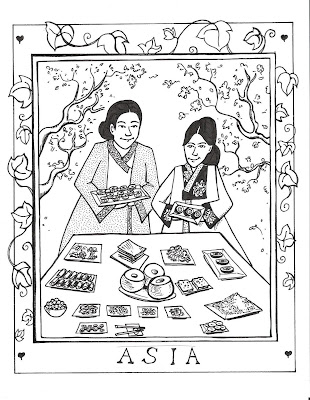 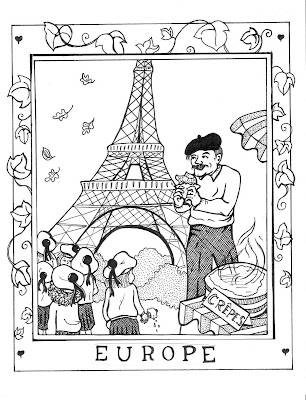 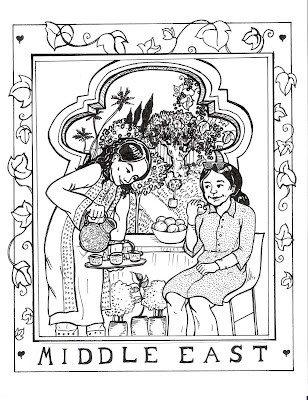 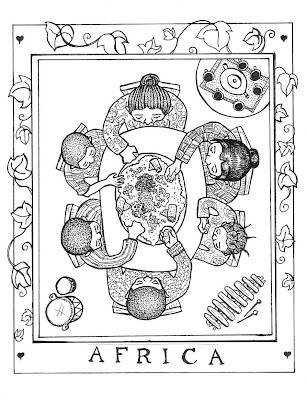 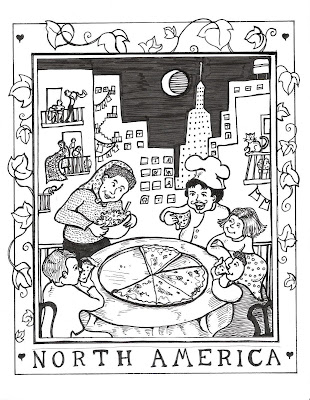 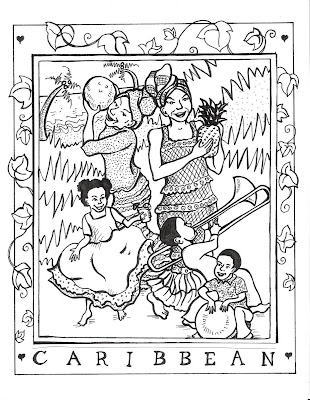 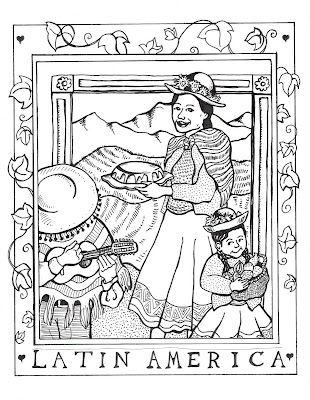 All Illustrations Ink (Faber-Castell pens) on Paper
Posted by Jennifer W at Thursday, November 19, 2009 No comments: